Michael Kerins was born to tell stories – he learned from his blind father, whose gift for oral communication was immense. Born and bred in Glasgow, of Glasgow born parents, Michael is a master storyteller and a multi award winner.

These awards including the “all Scotland TALL TALES Storytelling Oscar 2008″ and  “Aye Write Tall Tales Oscar 2010″.

He is seen by many as a great all rounder and at ease with any age range and ability.

One of his most famous characters is of course weetom. weetom’s adventures takes him into many situations which are fun and exciting and engages children to get involved. 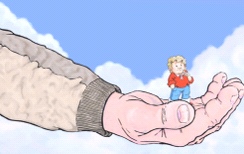 A long, long, long, long time ago there was a wee boy who had not just one, but five names. His first name was Thomas, his second name was Patrick, his third name was James, his fourth name was O’Neill (that’s his Granny’s nam

e), and lastly he was called Thumb.

Now, I don’t mean that he’s wee like a fairy, or an elf, or a goblin, or a sprite, or something magical. No, I mean he’s wee. He’s not magical; he’s ordinary, just like you or me. And if weetom came into your house, you could pick him up in your hand and he would talk to you.

In every single weetom story you’ll also meet and read of the adventures that he has with Uncle Dan. Uncle Dan is weetom’s mum’s younger brother. But, unlike weetom he’s not wee. He’s big. He’s bigger. He’s bigger than that again. He’s full of fun and is bursting with life, love and adventures just for weetom.

On 23 April weetom will be visiting Greenhill Primary School in Coatbridge.

Michael and Dominic are thrilled to announce that they will be visiting New Lanark Primary School to tell you all about weetom and his latest adventures …. Thursday 2nd April in the afternoon …. Watch out for us coming !